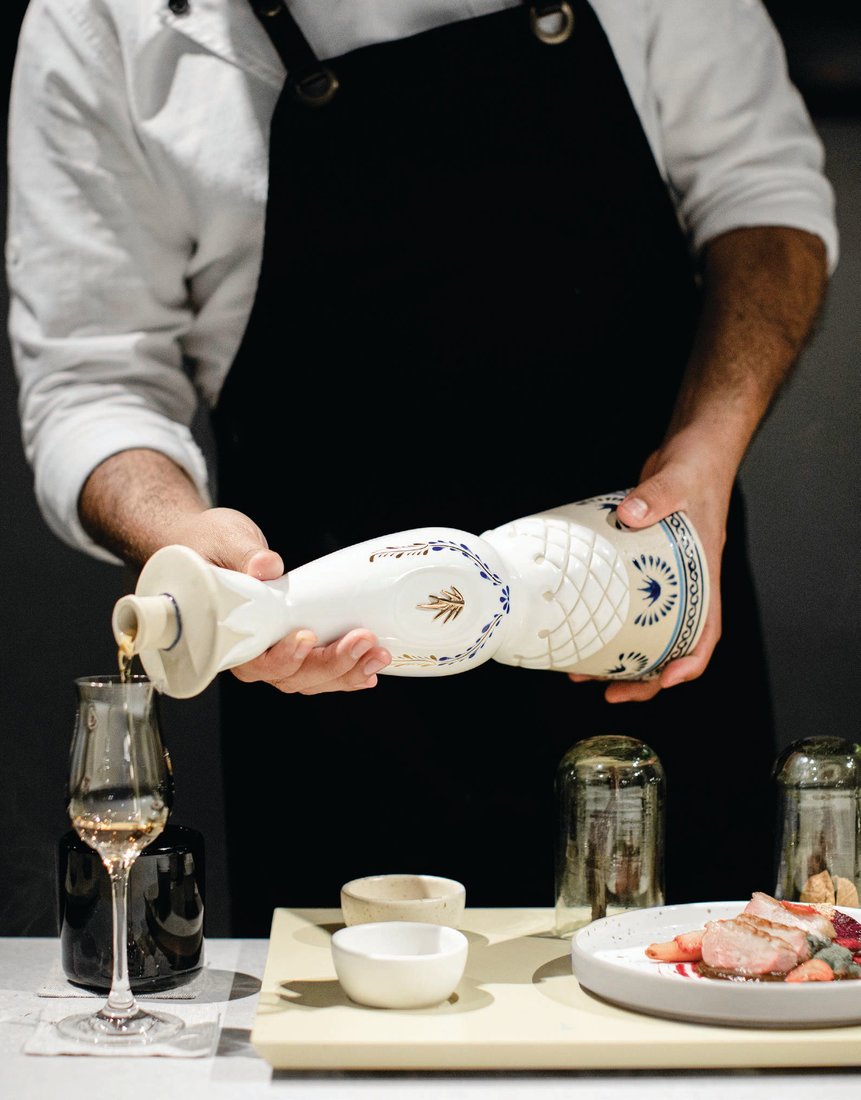 Let the tasting begin: A host pours Clase Azul’s añejo as part of A Taste of Culture.

After stepping inside the Clase Azul Boutique in Los Cabos, it quickly becomes apparent that those invited to A Taste of Culture are in for an entirely different experience in the hidden backroom. It’s akin to embarking on a magical mystery tour.

The boutique itself, a cozy lair adorned in rich marble and wood, is lined with shelving that holds the brand’s classic and limited-edition spirits. The handpainted bottles stand under spotlights like Mexican pop stars. Silver bottle tops bedazzle and line an entire wall. Behind a sleek bar, a mixologist shakes and pours each guest a signature cocktail, La Paloma: grapefruit, lime, salt, sparkling wine and Clase Azul unaged plata. A member of the culinary team breezes by and offers an amuse-bouche of red snapper and a thinly sliced, crispy sweet potato atop a delicate avocado cream sauce. Ethereal house music rolls through the room. It’s a head-spinning entry into the world of one of the most iconic tequila distillers, which has quietly amassed a sophisticated following among aficionados. Jocelyn Alfaro, the room experience manager, welcomes the group to the two-hour chef’s table and tequila-sipping journey. It hosts eight guests for each session. The small size ensures intimacy and enables the culinary team to create dishes based on each guest’s food preferences, which are outlined well in advance. Alfaro says the brand launched A Taste of Culture as a tribute to Mexican heritage, which doesn’t always receive the lofty respect it deserves. “We want to share a deeper understanding of Mexico’s cultural richness,” Alfaro says. “We also want to protect and show the world our culture, not only through our distillates, but also through our country’s food. The menu for the chef’s table was designed by the culinary team to get the perfect balance between our tequila and Mexican cuisine.”

The last sips of the opening cocktail are taken, and the group is led through a small passageway into a dining room behind the boutique. The cushy hideaway features a marble bar with high stools; a massive table with comfy chairs take up the remainder of the room.

At each place setting, a guest discovers two empty glasses, a small slice of bread to cleanse the palate between tastes of tequila and a tiny bowl of coffee beans to erase aromas as guests glide from one distillate scent to another. Lobster tlayuda with tamarind and coconut.

Two hosts introduce themselves and the culinary team, led by chef Gil Covarrubias. The lights dim, and two cylinders—fastened to the ceiling and resting on the bar—rise in unison in a flourish. The surprised guests applaud. Over the course of the next 90 minutes, A Taste of Culture is a hybrid of food-and-tequila tasting, cultural storytelling and multimedia show, complete with flat-screen TV monitors and, during the crescendo, a hidden ceiling projector used to cast gorgeous video onto the table.

It’s quite a choreographed ride as Covarrubias introduces each course and discusses the connection to the tequila itself—whether the unaged plata, reposado (aged eight months), añejo (aged 25 months) or ultra (aged five years). Fear not, mezcal fans; Clase Azul’s rendition, made in Durango with wild maguey cenizo, is also part of the tasting. Everything is sipped neat, as the flavors and nose of each spirit are discussed in concert with dishes like ceviche with sorbet accented with chiles, local lobster, and pork dressed in mole sauce whose 34 ingredients—a commingling of spices and fruit—are a reminder of why Mexican cuisine is prime for the global spotlight. After all, the country’s tequila, with Clase Azul setting the pace, is already there. Tue.-Sun., seatings at 1 and 6PM, The Shoppes at Palmilla, 23406 San José del Cabo, B.C.S., Mexico.